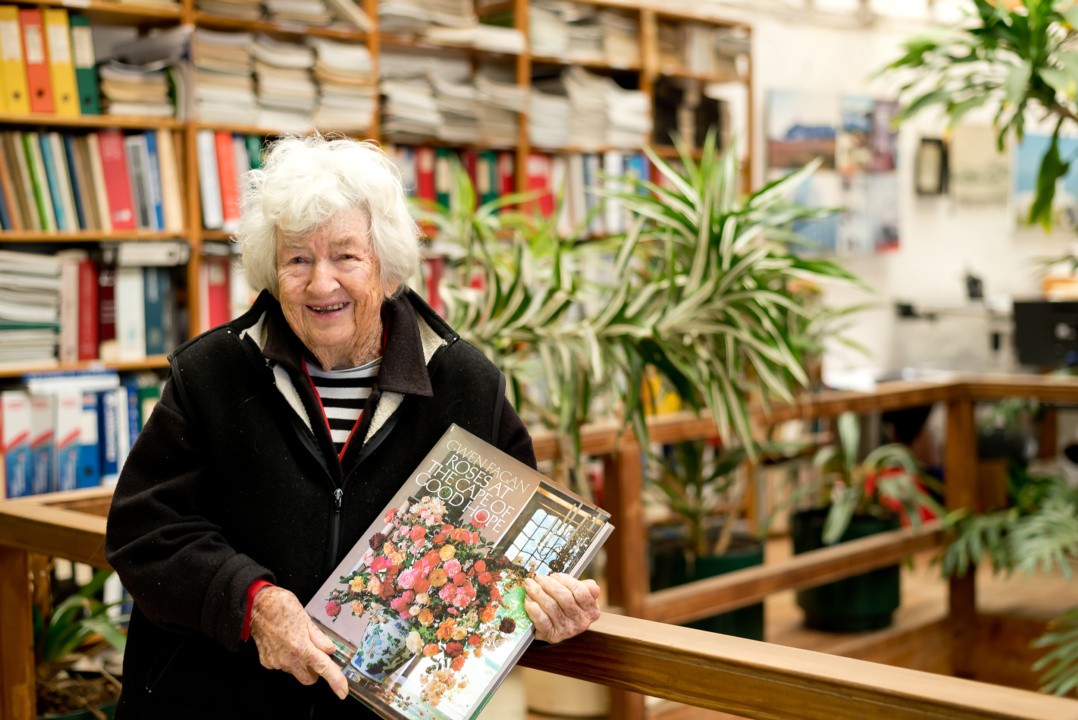 Mrs. Gwen Fagan and her book at her office in New Church Street

Inspired by Gwen Fagan’s book Roses at the Cape of Good Hope, the Rosaria perfume tells the story of a rose at the end of a summer day. The perfumer tried to capture that exact moment when the rose exudes its last breath, after which it looses all its petals.

When the business needed to move into a bigger space the decision was made to purchase a corner block on Pepper Street and New Church Street. Plans were made to restore and enlarge the space. The office of Fagan Architects was next door, so they were tasked with the project.

One of the first questions asked by Mrs. Gwen Fagan, who has assisted her husband Gawie with his projects for many years, was: “What exactly is going to happen inside this building?”

She heard the story of Wild Olive Artisans and as a passionate horticulturist and big Fynbos enthusiast, she shared with our perfumer and Creative Director Marioara de la Tzara her knowledge of the plants. In return the Marioara confessed to her about the lack of inspiration while working on a perfume that was supposed to be about the roses. Mrs. Fagan than recommended her book “Roses at the Cape of Good Hope”. This book is a meticulous catalogue of each rose species that ever arrived in the Cape of Africa, told in beautiful stories. Some of these rose species are now extinct.

This moment inspired the perfume that addresses the subtle point of the book: the ephemeral quality of beauty and its importance in our lives.

Mrs. Fagan’s book “Roses at the Cape of Good Hope” is available from our shops in Cape Town and Bucharest.