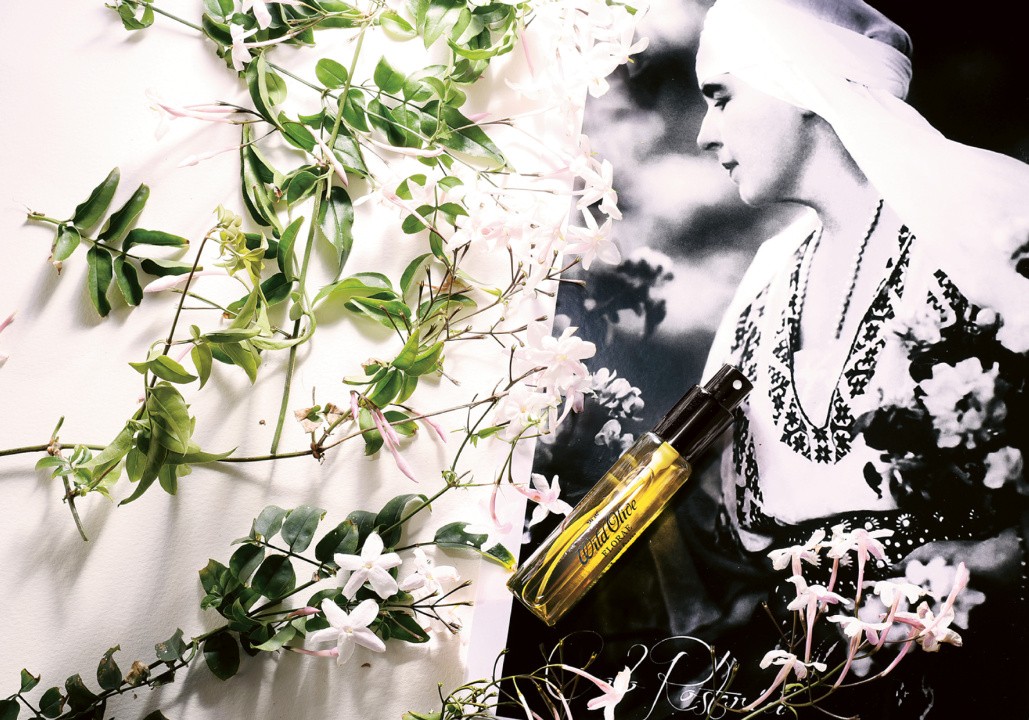 One of my muses is Queen Maria of Romania, the granddaughter of Queen Victoria of England and Russian Tsar Nicolai the II-nd. She was regarded as the most beautiful and most elegant princess of her time.

Her writings and her fashion style were a guideline and inspiration for many Romanians. It is Her Majesty who instilled in me the love and respect for the folk costume. It is because of her that I adopted it as my “uniform”, outraging my generation in the early ‘90, when the rush was to acquire the famous global brands newly entered on our fresh out of communism market.

Coming back to the art that occupies my time and the perfume of the queen, I again gathered my inspiration from her writings…

Starting with her childhood memories “of humid, dried leaves”, “smoke”, “vegetable gardens”, “rotten potatoes”, “old hessian bags”, “the sweet violet”, “the laurel”, “the huge cedar in front of the house”, the lake belonging to the residence in England, the fruits gathered from the orchards were she was visiting with her pony Isabelle, and right to the smell of basil and orange flower from her mother’s boudoir, I laid the base of her perfume same as the most distant memories that sit always furthest, at the back of our minds.

In her lengthy walks, Her Majesty always paid attention to nature, the caprifolium fences with the fragrant honeysuckle flowers, “ the grand magnolia with smell like lemon”, “passiflora”, “jasmine”, “the primulas coming out of the dead leaves”, or the “rosa gallica, pink and fresh” associated by the queen with the image of a fairy.

Reaching to this point in my reading, I already decided that my queen was the absolute queen of flowers, and the name of her perfume should comprise, well, all flowers…

She was fascinated by her mother’s boudoir, with the perfume flacons, soaps, crèmes, rose water, the ricin pastilles, or the iris powder sachets from Florence, the same place from where today we are getting our orris butter from our perfumes.

While still a youth in England, the Queen falls in love with the linden flower, a smell that she recalls while visiting Iasi, a city in north-east Romania and the capital of Moldova at the time. The “black salsify from Osborne”, or the smell ”of the white beer soup, sweet and with raisins”, the Baumkuchen-“ the brown cake covered in sugar”, the smell of the lilies, for which the queen made almost an obsession, or that of the roses full of dew that she planted in all her gardens, all are a part of her extraordinary life. She remembers the smell of the English fog, her father’s tobacco, and a heavy Russian perfume, elements of which are found in the perfume.

I kept elements of the wet England nature, but also the lush Romanian earth in spring, represented with oak-moss, vetiver, sandalwood, and hyrax, which is an African ingredient that so well pictures fields of green from spring to autumn and of dry grass.

And because the queen also loved the perfume of lady Emma Osborne with the lemony scent, and while in her time in Malta she was surrounded by jasmines, geraniums, white chrysanthemums, anemones, bougainvillea and citrus trees, a world which she called “of dream”, I added the petitgrain with its green tint, the neroli, the zest of lemon and mandarins, over the geranium and the Egyptian and the sambac jasmines…

She loved the English opera and the theatres where “you could smell the bouquets of red, velvety and very opened roses” for which I added the noble damascena and centifolia roses.

I wanted to mention also the scent of the churches with the frankincense and narcissus used at ceremonies, “the carnations, violets, basil and mock orange flowers” given to the Queen by a monk from the Cernica monastery, or the jams and apples from the nuns of the Pasarea monastery where it smelled like smoke. I did not forget the smell of spring and its flowers, the tulips and the hyacinth, the acacia or the fruit trees in flower, with the pepper and violets from Malta planted by her mother, Her Imperial Highness the Dutches of Edinburgh.

But see, enumerating all the flowers scattered through the queens’ memory, will take so much more than just my mere scribble…

“La princesse lointaine” as the Queen was often called in her youth for the reason that she lived in the far and wild Romania, was renowned for her beauty and elegance. She was always surrounded by flowers in her quarters and in her gardens, at the Cotroceni Palace, Peles Castle, at the Balcici summer residence, or everywhere she lived, even if for just a little while.

She earned the name of “the Queen of Gardens” and for me she will always be “The Queen of Flowers”.

I tried to simplify the picture as much as I could, using merely 35 different materials but trying to remain however faithful to the style of the era when the queen lived, that of multifloral bouquet.

The name of the perfume is obviously “Florae”- flowers, all flowers, and many white flowers to be more specific.

Florae is presented as a parfum extract, the most concentrated form of liquid perfume.

All quotes are form Her Majesty Queen Maria of Romania’s writings.

“After the war, the passion for gardening came towards me with a power I have never known before. Flowers everywhere, in gardens, in houses, in hospitals, in every single corner of the street, flowers, flowers as a sign of hope and faith. And after this, I created gardens everywhere I went, colourful gardens, memory gardens, for happiness and for beauty”